Unlocked, multi-mode and will work on all US carriers including AT&T, Verizon, T-Mobile and Sprint, as well as MVNO's (Mobile Virtual Network Operators) and most international carriers
US version with warranty
Pure Android Experience: Android 6.0 Marshmallow
Fingerprint sensor for enhanced and simplified security - turn on your screen and unlock instantly with just your fingertip

- The Best All-Around Camera Ever Put Into a Nexus.

- Multi-mode device will work on all US carriers including AT&T, Verizon, T-Mobile and Sprint, as well as most international carriers.

* All battery life claims are approximate and based on an average mixed use profile that includes both usage and standby time. Actual battery performance will vary and depends on many factors, including signal strength, network configuration, age of battery, operating temperature, features selected, device settings, and voice, data, and other application usage patterns.

*** Instead of a password, only your fingerprint can access your email and photos, or make purchases on Android Pay. Android Pay is available in the US only.

**** Nexus 5X and Nexus 6P devices get the latest version of Android directly from Google. These devices will receive Android version updates for at least two years from when the device first became available on the Google Store. Once an update is released, it can take up to two weeks or longer for it to reach your device, depending on on your carrier. Capturing the soul of the Nexus family, the 5X offers top-line performance in a compact, lightweight device that's ready to go anywhere, anytime. Beneath the 5.2-inch display is a hexa-core Snapdragon 808 processor for world-class speed at an affordable price. 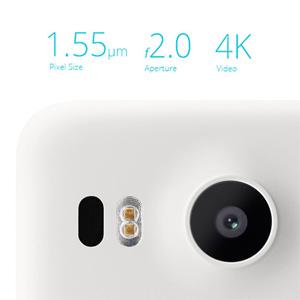 The larger 1.55 µm pixels capture more light, even in the dimmest conditions, for stunning images. A faster Google Camera app and smart Google Photos app will keep your memories at your fingertips.** All your Photots, Organized and Easy to Find

Access is quicker and more secure with a fingerprint sensor placed on the back of your device. One touch turns on your phone and unlocks compatible apps.***

The USB Type-C charger is reversible, which means no more guessing which way is up. And it's fast—get almost four hours of use after only ten minutes of charging.

Built from the inside out to make the most of the world’s most popular OS, with Android 6.0 Marshmallow right out of the box and automatic software updates as they’re released.****

The Best of Google in the Palm of Your Hand

Your favorite Google apps come pre-installed. Search, Maps, Chrome, YouTube, Photos, Gmail, Drive, and so much more — it’s all there waiting for you.

Specifications
Reviews
Write Your Own Review
More from LG
Thanks for contacting us with your comments and questions. We'll respond to you very soon.
We can\'t process your request right now. Sorry, that\'s all we know
Please Enter Valid Captcha.